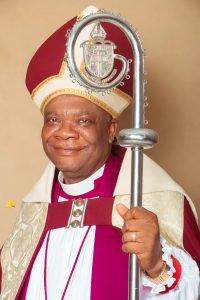 THEME: POWER OF PRAISE IN THE BATTLE OF LIFE

INTRODUCTION
Second Chronicles chapter twenty is the story of a man named Jehoshaphat who encountered a problem and was able to praise his way to victory.
He Encountered a Problem
(2 Chronicles 20:1-2)
A great multitude of his enemies got themselves for battle against him and his people. At first, he didn’t see a solution. Perhaps you feel that way today. But just wait. We are about to see how that problem is a blessing in disguise.
He Established His Purpose
(2 Chronicles 20:3-4)
One of the first things we need to do when we have a problem is to establish a purpose. Jehoshaphat didn’t turn to the Lord after he’d tried everything else like so many of us do. Instead, the very first thing he did when trouble came was to seek the Lord. We can come boldly to God’s throne of mercy as Jehoshaphat did (see Hebrews 4:14-16).14 Therefore, since we have a great high priest who has ascended into heaven, Jesus the Son of God, let us hold firmly to the faith we profess. 15 For we do not have a high priest who is unable to empathize with our weaknesses, but we have one who has been tempted in every way, just as we are—yet he did not sin. 16 Let us then approach God’s throne of grace with confidence, so that we may receive mercy and find grace to help us in our time of need.
He Examined His Past
(2 Chronicles 20:5-7)
When you encounter a problem, it is helpful to look back over your shoulder and see what God did for you in the past. That’s what Jehoshaphat did. God did not save you to abandon you. His name is I AM, not I WAS. If you have seen Him work in your life in the past, believe that He will do so in the future, even now. He is able to bring something good out of every circumstance in your life ( Romans 8:28).28 And we know that in all things God works for the good of those who love him, who have been called according to his purpose.
He Embraced a Promise
(2 Chronicles 20:8-11)
King Jehoshaphat unashamedly poured out to the Lord that the enemy was trying to away the possessions God had given them. You’re not going to embarrass God by standing on His promises. When trouble comes, you are to copy what King Jehoshaphat did. Look back to your past and see how God has brought you thus far. Then find a promise in the Word of God and stand on it.
He Exposed His Powerlessness
(2 Chronicles 20:12-13)
King Jehoshaphat didn’t stand proud or with any arrogance attitude because he was a king. Instead, himself and the people admitted they didn’t have the strength, the resources, or the knowledge to overcome the enemy. They called out to God with a humble devotion! How i wish that we would be that way when troubles come our way.
He Enlisted His Protection
(2 Chronicles 20:14-17)
All of Judah looked to God and He answered with a promise of victory. How wonderful when the Holy Spirit of God takes a promise from the Word and makes it real to you and I. The load is lifted, the care vanquished, the worries disappear when God tells us that the battle is His. My victory and yours does not depend upon our abilities. It is also not our responsibility. It is our response to God’s ability — which is the greatest ability. Having been assured by God,
He Engaged His Preparation
(2 Chronicles 20:18-19)
Before the battle even began, Jehoshaphat offered praises to God. So many times we want to get in the battle or get to work without as much as a thought to worship God for the blessings and victories He will bring. There is simply nothing more important than worship in preparing to battle problems. The man who kneels before God can stand before any problem.
He Expressed His Praise
(2 Chronicles 20:20-24)(read)
God is ready to move on your behalf in victory but He will not do one solitary thing until you praise Him. Prayer infuses us with the energy of God and confuses the enemies of God. But If you know that your problem is caused by the enemy, then praise the Lord! It doesn’t fit the devil’s grid of how we are to attack problems. Many a times the enemies know that when they attack you, you will surely engage in prayer but you get them confused when in the midst of trouble and you praise. Like paul and Silas in prison Act 16, after they have prayed,they started praising God
He Enjoyed His Provisions
(2 Chronicles 20:25-26)
When we attack problems God’s way, we will enjoy His provisions. Confusion came into the camp of the enemy as a result of their praises to God. The battle was won and they gathered all the silver, gold and jewels. The same will happen for you. If the devil attacks you and you praise God, then you’re going to find that the devil becomes God’s messenger boy to bring you riches. When we praise Him, embrace His promises, and stand upon them, that He always brings victory.

PRAISE BREAKS THE ENEMY’S OPPRESSION
In Acts 16:25-26 Paul and Silas praised God and the doors in the prison they were in were opened and they escaped. Praise lifts us out of oppression, and praising God also helps us out of our self-centered ways.
“But about midnight Paul and Silas were praying and singing hymns of praise to God, and the prisoners were listening to them; and suddenly there came a great earthquake, so that the foundations of the prison house were shaken; and immediately all the doors were opened and everyone’s chains were unfastened. – Acts 16:25-26

5. PRAISE CONFUSES THE ENEMY & FORCES OF EVIL
Praise is a spiritual weapon. The power of praise in battles is shown also in Psalm 2 :8 Out of the mouth of babes and nursing infants
You have ordained strength,
Because of Your enemies,
That You may silence the enemy and the avenger., and Psalm 149:5-9(READ)” Let the saints be joyful in glory;
Let them sing aloud on their beds.
6 Let the high praises of God be in their mouth,
And a two-edged sword in their hand,
7 To execute vengeance on the nations,
And punishments on the peoples;
8 To bind their kings with chains,
And their nobles with fetters of iron;
9 To execute on them the written judgment—
This honor have all His saints.
Praise the Lord!”
Praise helps us to focus on God and realize our need for Him, and thus turn the battle over to Him. When we do this, God will then bring Victory. This makes Praise and Prayer and Dependence on God great weapons in Spiritual Battles
“Listen, all Judah and the inhabitants of Jerusalem and King Jehoshaphat: thus says the LORD to you, ‘Do not fear or be dismayed because of this great multitude, for the battle is not yours but God’s.” – 2 Chronicles 20:15
“When he had consulted with the people, he appointed those who sang to the LORD and those who praised Him in holy attire, as they went out before the army and said, “Give thanks to the LORD, for His loving-kindness is everlasting.” 22 When they began singing and praising, the LORD set ambushes against the sons of Ammon, Moab and Mount Seir, who had come against Judah; so they were routed.” – 2 Chronicles 20:22
Praise is a weapon that is very effective in pushing back the forces of evil. It is also very effective in helping us to better focus on God in our quiet time with Him and in our daily lives. Praise helps us to focus on God and thus have better intimate communication with Him and to hear God’s voice. Hearing God’s voice is the most important part of our fellowship time with God. Praise also helps us to know God in real and personal ways, rather than just know about God.
“And now my head will be lifted up above my enemies around me; and I will offer in His tent sacrifices with shouts of joy; I will sing, yes, I will sing praises to the Lord” – Psalm 27:6