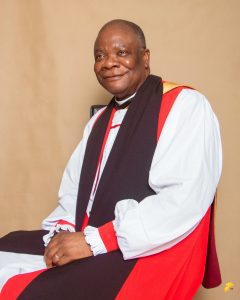 THEME: THE BISHOP AS AN AMBASSADOR OF GOD

The word “Ambassador” is defined by online dictionary as a diplomatic official of the highest rank accredited to a foreign government or sovereign as the resident representative of his or her own government or appointed for a special and often temporary diplomatic assignment. A foreigner or anyone whose nationality is in doubt cannot be an ambassador of a serious country.

The role of an ambassador could be summed up under five headings.

AMBASSADORIAL IDEAS IN THE BIBLE

In the Old Testament, the word mal’akh “messenger” or tsir “one who goes on an errand” are constantly used by the Hebrews on various occasion and for various reasons had recourse to the services of Ambassadors, not only on occasions of hostile challenges or insolent menace but of friendly complement or request for alliance or aid e.g.

In the New Testament, the term is used in a figurative sense. Paul calls himself “an ambassador in chains” Eph. 6:20 and in 2 Cor.5:20 includes, with himself, all ministers of the gospel (Bishops included) as “ambassador … on behalf of Christ” commissioned by Him as their Sovereign Lord, with the ministry of reconciling the world to God.

BISHOP AS AN AMBASSADOR: At the presentation of “Letter of Credence” by the primate (acting on behalf of God) at our consecration. We all agreed to this charge “ …A bishop in God’s Church is called to be one with the Apostle, to proclaim Christ’s resurrection and interpret the Gospel and testify to Christ’s Sovereignty as Lord of lords and King of kings. You are called to guard the faith, unity and discipline of the Church; to celebrate and provide for  the administration of the sacrament of the New Covenant … and to be in all things faithful pastor and wholesome example to the entire flock of Christ. With fellow Bishops, you will share in the leadership of the Church throughout the world… your joy will be to follow Him who came, not to be served but to serve and to give his life a ransom for many.

PRIMATE: Are you persuaded that God has called you to the office of a Bishop/an Ambassador

BISHOP ELECT: I am so persuaded

JESUS AS AN IDEAL AMBASSADOR OF HIS FATHER:

APOSTLE PAUL AS AN AMBASSADOR OF GOD

In both his words and actions in the presence of rulers and ordinary people reflected those of his heavenly king. His pastoral counsel brought a good number of people into a relationship with God through Christ Jesus.

Jesus Christ has set examples for us to follow. We must therefore strife to be like our master in this world where we serve and always be conscious that “we are in the world but do not belong here.” Our citizenship is in heaven.